Nature notes and a record of species recorded from in and around Felbrigg Park.

What looked like being a pretty uneventful visit today was brightened up when at the end of my loop of the lake I spotted a bird perched up on the barbed wire fence by the reedbed which proved to be as hoped a Whinchat, and although fairly mobile and never really allowing a close approach, it was really nice to connect with one as they are far from guaranteed in the park. 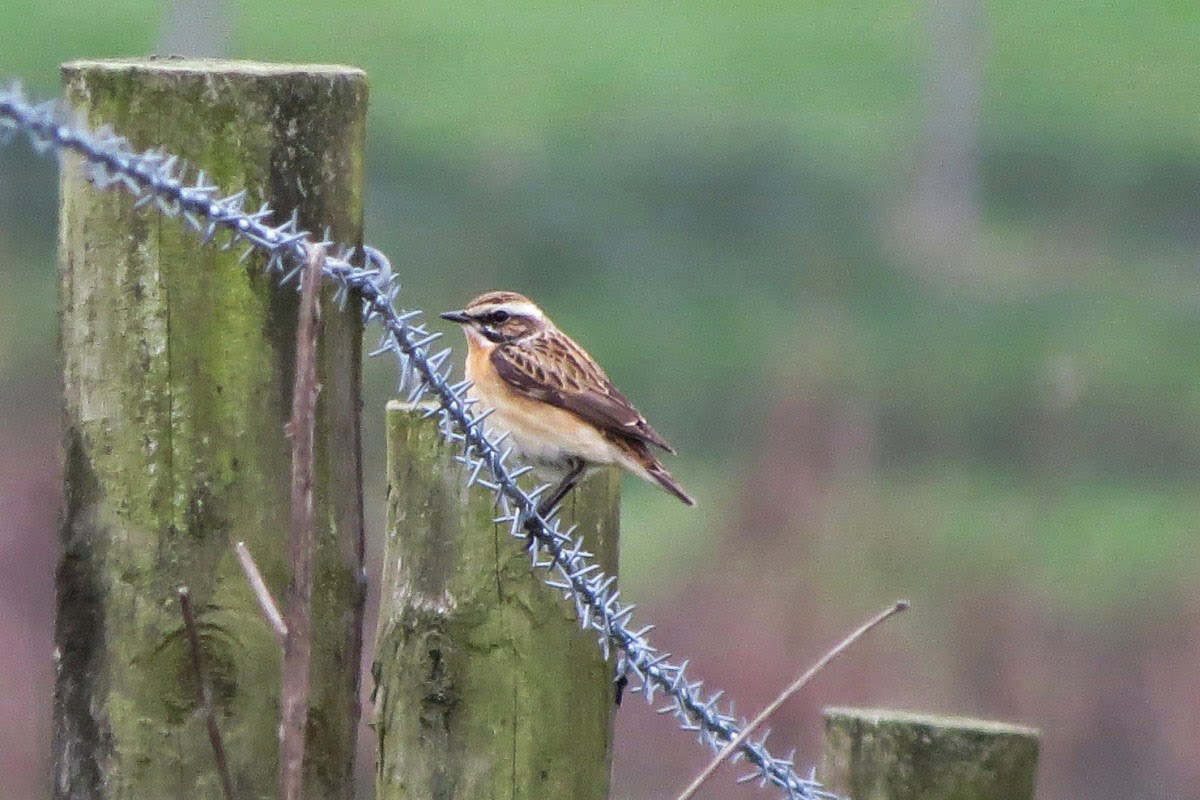 The first baby Moorhens were present on the lake, as was a drake Mandarin, and a single Common Snipe was on the meadow.
Posted by Simon at 7:58 pm

Highlight of my last couple of visits to the park has been the return of the Cuckoo which has been heard calling occasionally but I've not managed to see it so far.
Also of note are the good number of House Martins which have now joined the Sand Martins and Swallows feeding over the lake. On the lake itself the second drake Mandarin is still around and continues to try to muscle in on the female but she is being admirably protected by her mate.
The Common Whitethroat is still around, and Chiffchaffs, Blackcaps and the odd Willow Warbler are to be heard in the woods, and my first Red Admiral of the year was seen today too.
A female Mallard along with her lone duckling was on the lake earlier in the week, but I've not seen her, or the other female with the 9 ducklings, for a few days now but hopefully they are still safe and well. 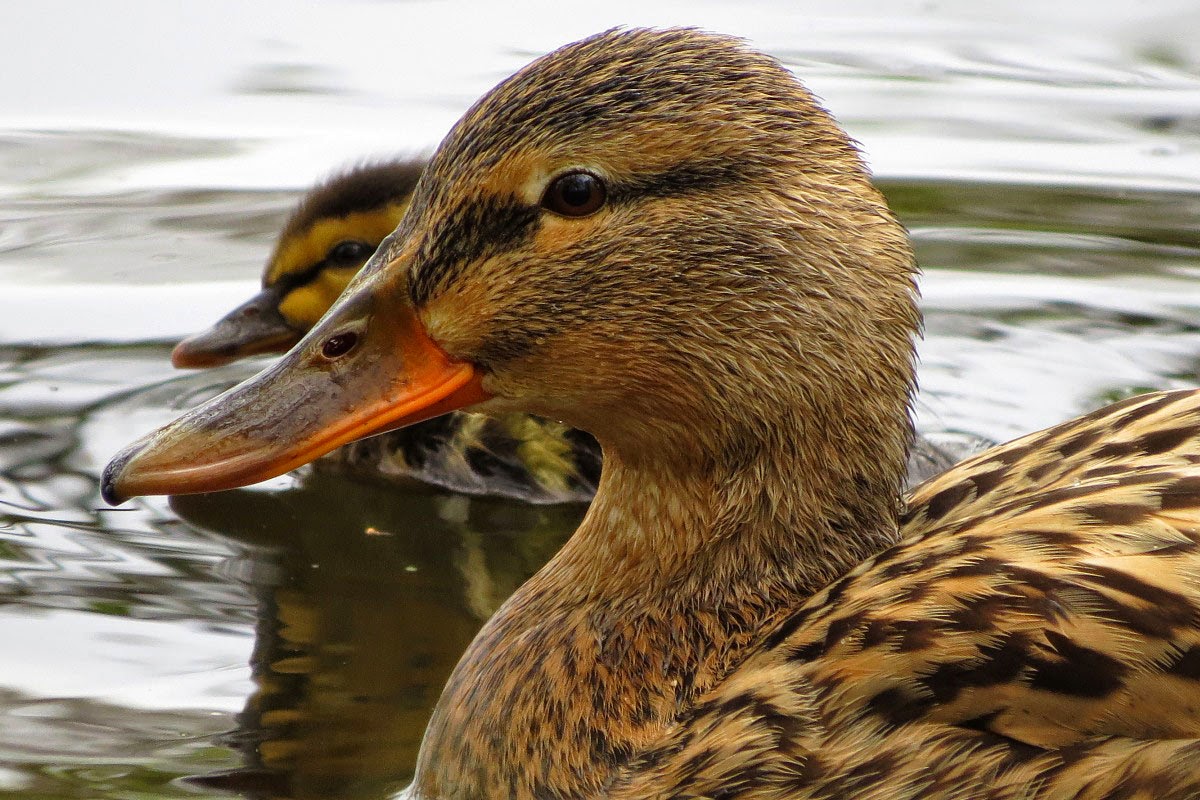 Sadly the dropping of water levels on the meadow at, in mine and others opinion, a far too fast a pace has caused the Little Grebes to not only abandon their nest but also it now appears the site full stop which is a real shame, but hopefully lessons learnt and in the future the drainage will be managed better for the benefit of all the birds on site. 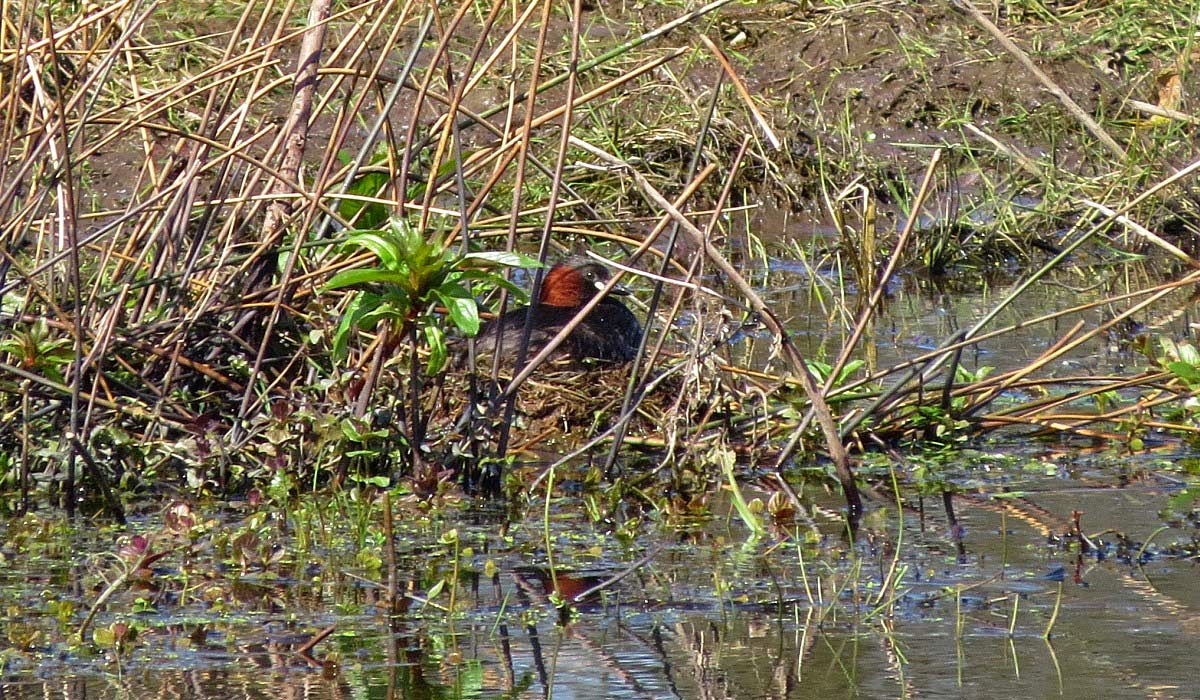 Walking down to the lake today I was greeted by the song of a Reed Warbler coming from the reedbed and after waiting a while was eventually rewarded with good views. 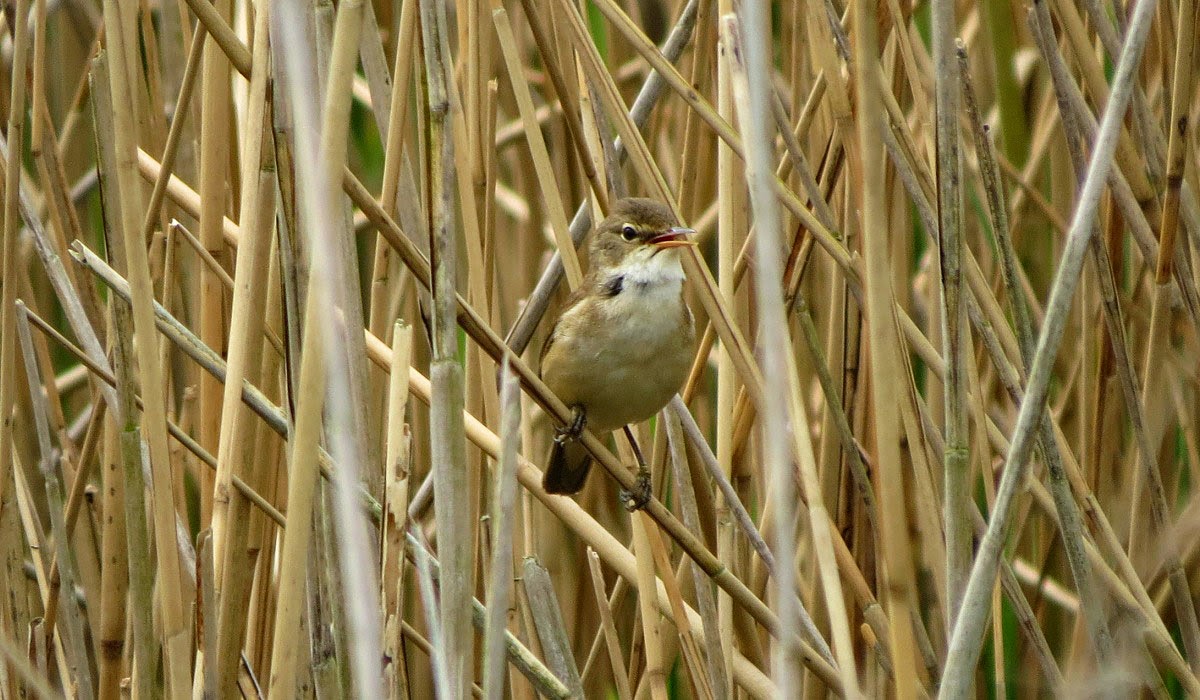 The second new bird of the year quickly followed with a Common Sandpiper flying round the lake, and after briefly alighting on a branch in the water it flew off again being joined by a second bird, but with water levels on the lake being high they struggled to find anywhere suitable to feed. 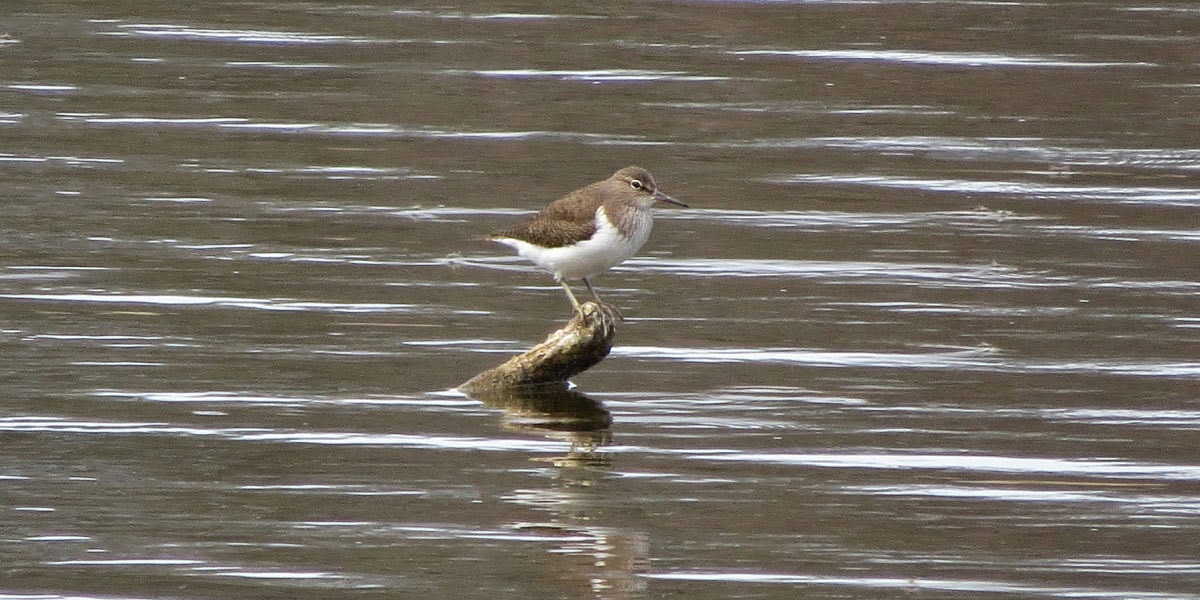 A scan across the fields to the south of the lake revealed a feeding flock of ten or so Fieldfares. Amongst them was a particularly striking individual with a black face and breast which certainly looked rare when first picked up facing head-on but sadly I couldn't make it into anything other than a Fieldfare although an internet search didn't reveal any photos of one approaching its appearance so a notable bird nonetheless. 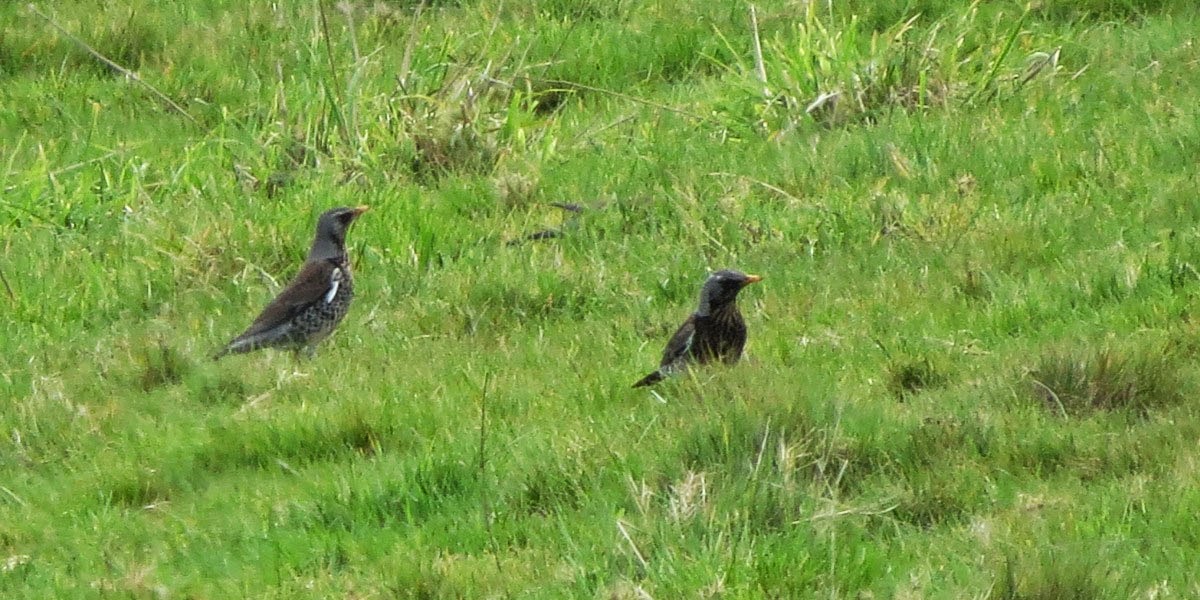 On the lake a second drake Mandarin had appeared much to the displeasure of the 'resident' pair with much sparring going on between the two males. 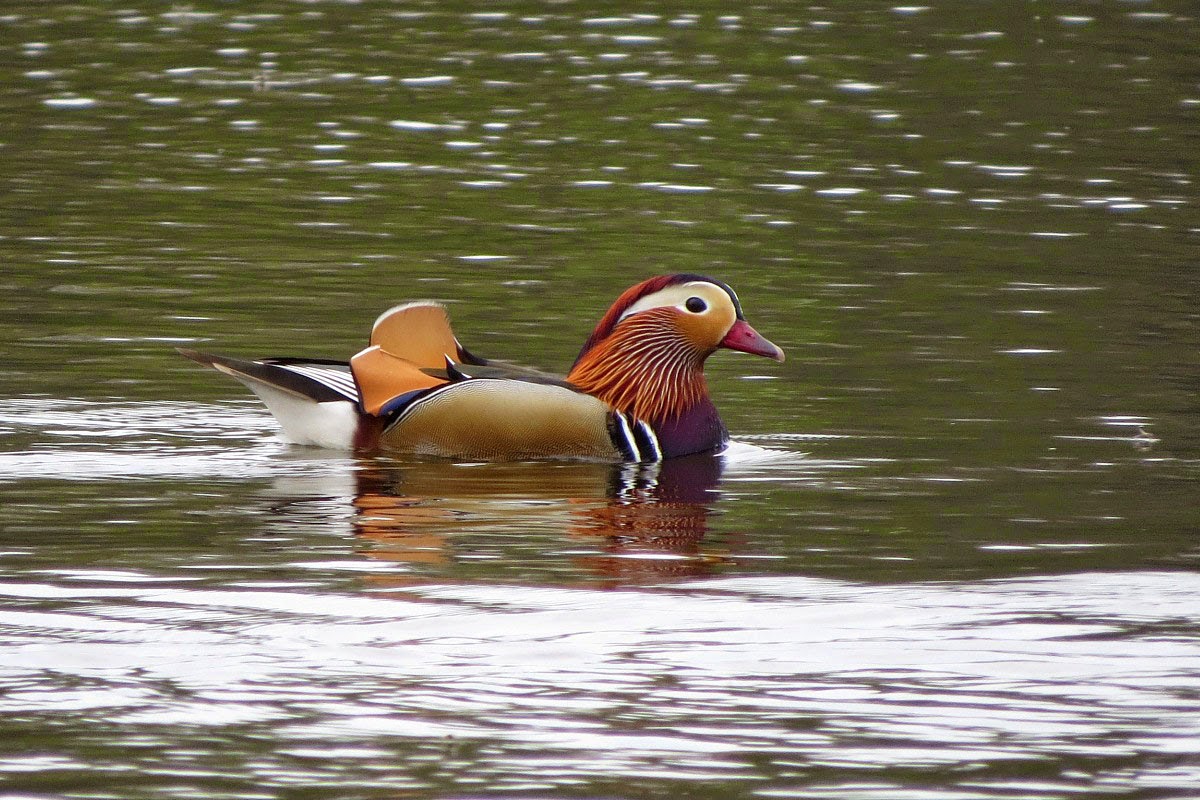 Highlight of a walk down to the lake today was this Redshank, only the third one I've ever recorded in the park, which dropped on to the flooded meadow during a shower. It was initially chased around by the resident Lapwings but they eventually settled down and allowed it to feed unharassed. 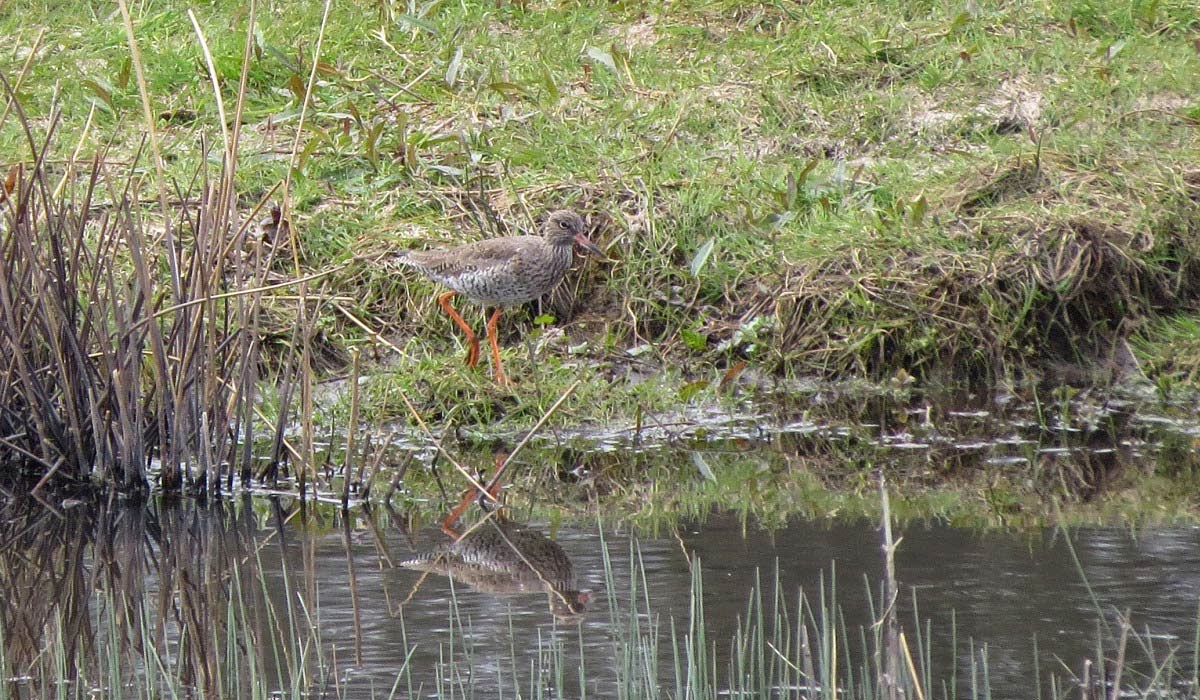 The Green Sandpiper was again present with it landing on the water meadow for a few minutes too before flying off again, but for once lingered long enough for me to get a record shot of it. 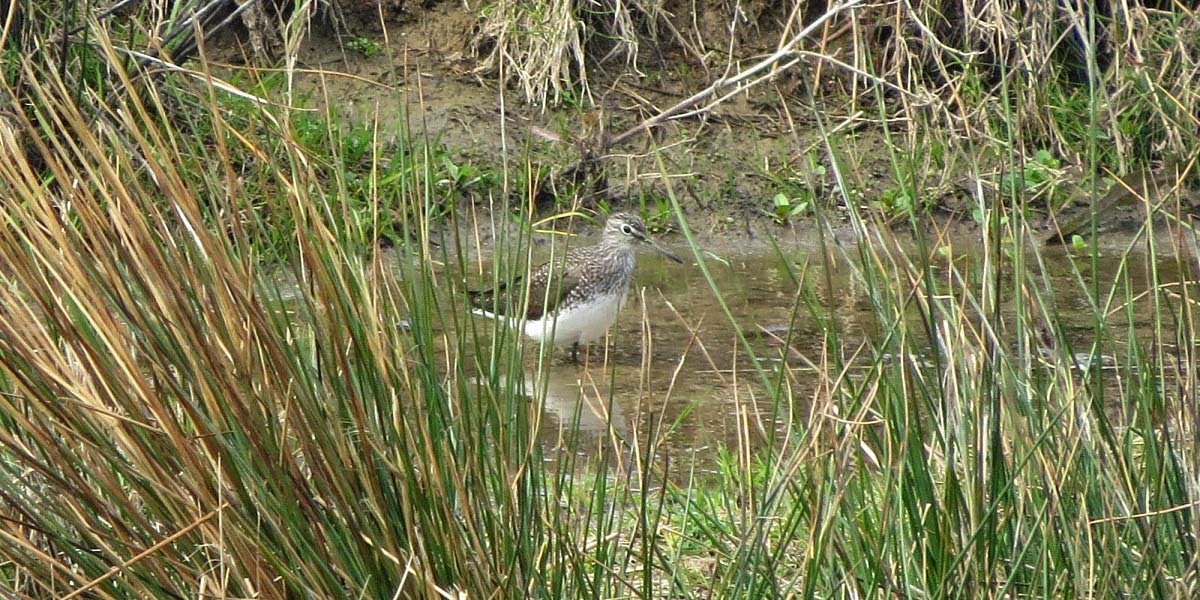 On most visits now there is a flock of Sand Martins feeding over the lake, with a few perching on the fence today during one of the showers to enable me to get a nice close-up pic of one of them. 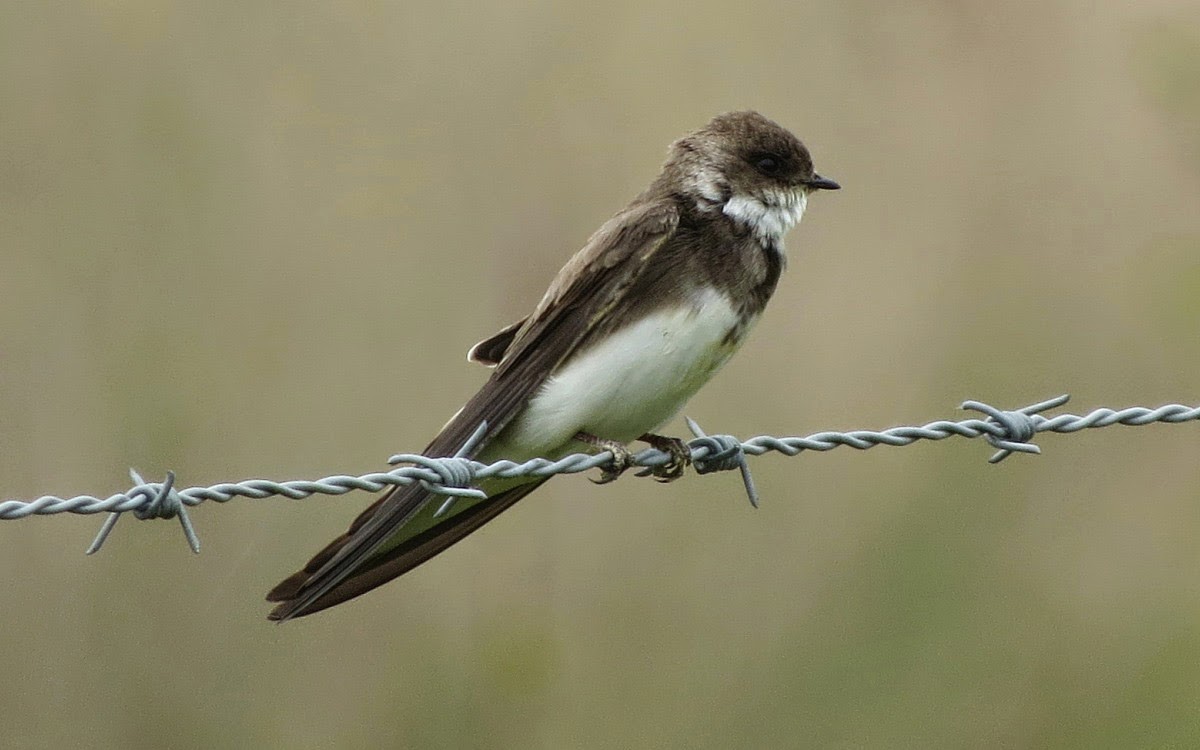 The first sign of successful breeding was evident today with this female Mallard and her 9 ducklings. 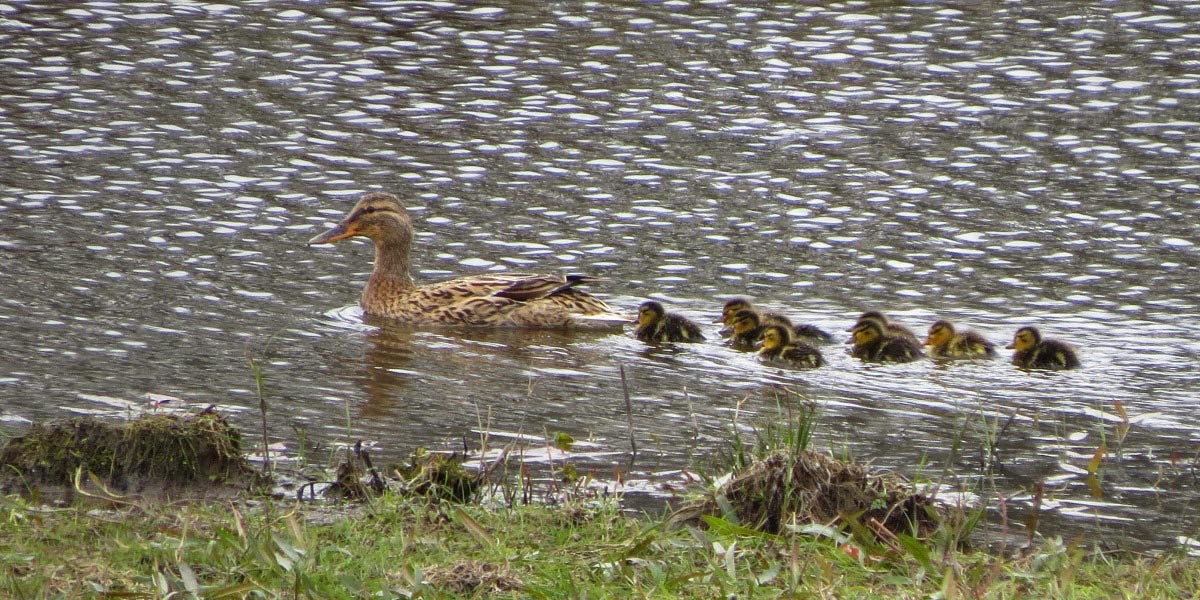 Butterfly-wise the first Large White of the year was seen, along with Orange-tip, Peacock and Comma.
Posted by Simon at 7:36 pm

Not much doing bird-wise in the park today with the cold wind persisting, aside from the Common Whitethroat still being present and a few hirundines over the lake, but this young buck Roe Deer which was feeding in the meadow alongside the beck certainly brightened up the visit. 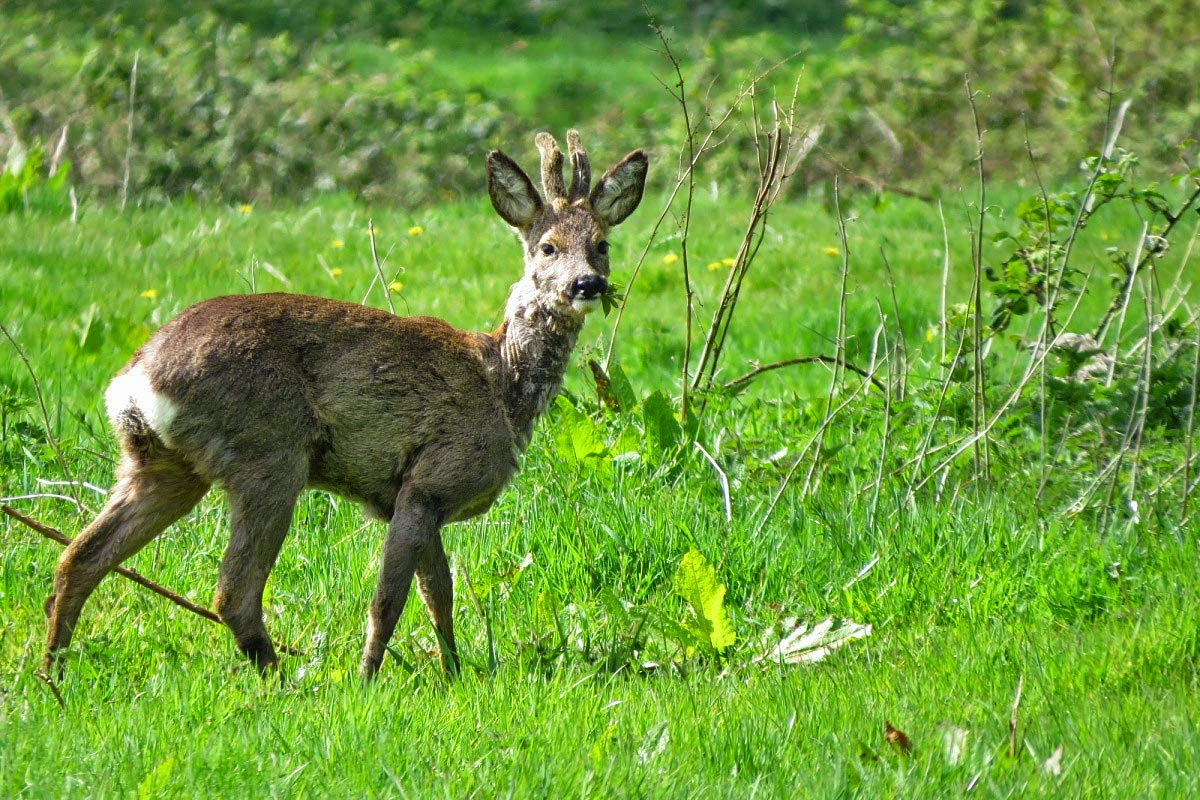 Highlight of a visit to the park today was a Common Whitethroat singing from the brambles by the lake outflow, and which constitued the 100th species of bird recorded in and around the park this year.
With a fairly brisk and cold wind it kept low down inside the bushes, but I managed a quick photo of it as it appeared in a gap through the leaves and twigs. 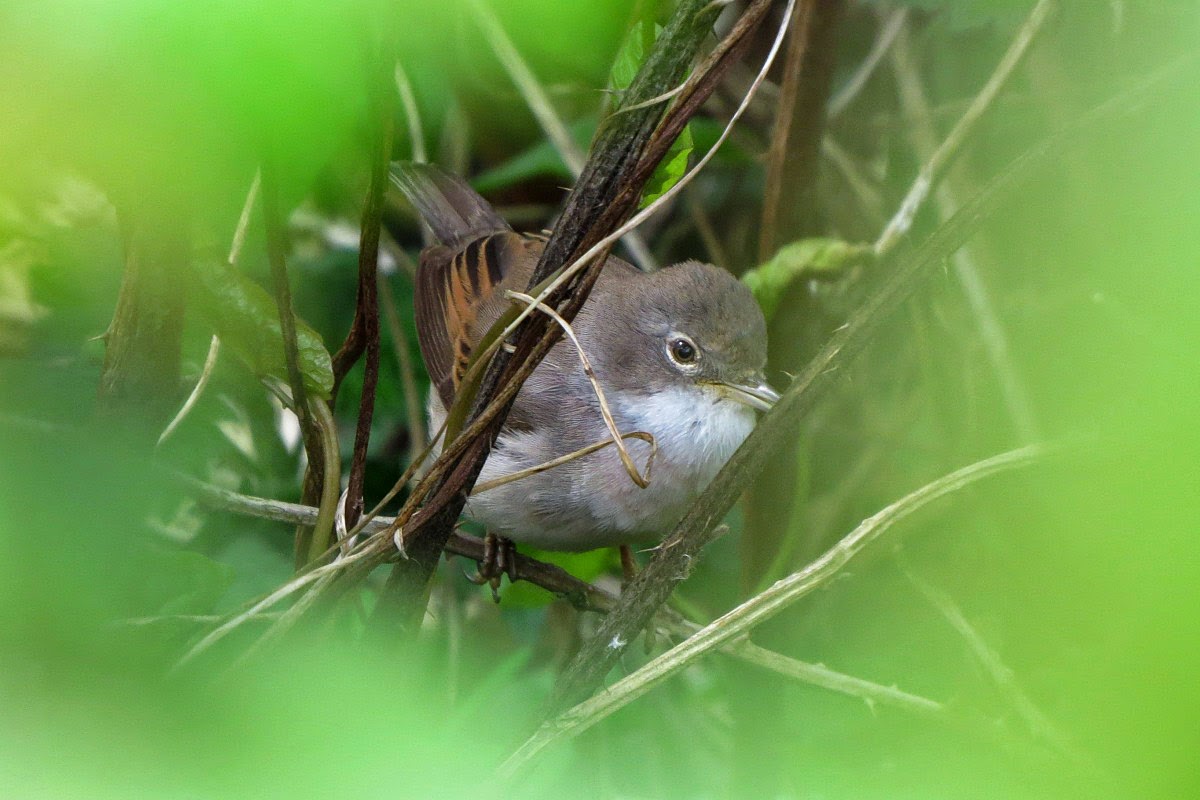 Heading back to the car, a couple of Common Shrews were seen as they madly chased each other through the leaf litter squeaking away, and this Nuthatch was noted on the feeders. 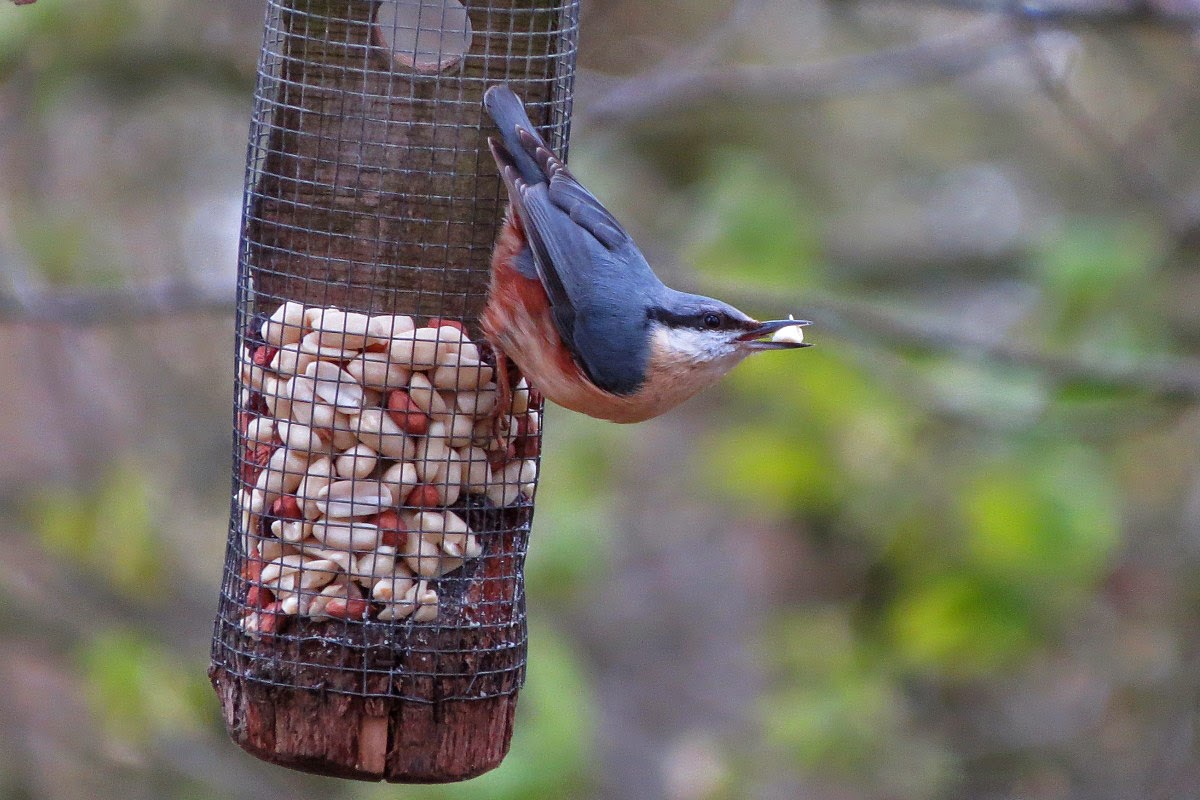 Despite again being present early morning, the Red-rumped Swallow had moved on before I arrived this morning, but my first House Martins of the year were present over the lake amongst the Sand Martins and a few Swallows.
With the meadow to the north-west of the lake sheltered from the wind, I was pleased to find my first Green-veined Whites and Orange-Tips of the year on the wing, with some of the latter proving particularly photogenic. 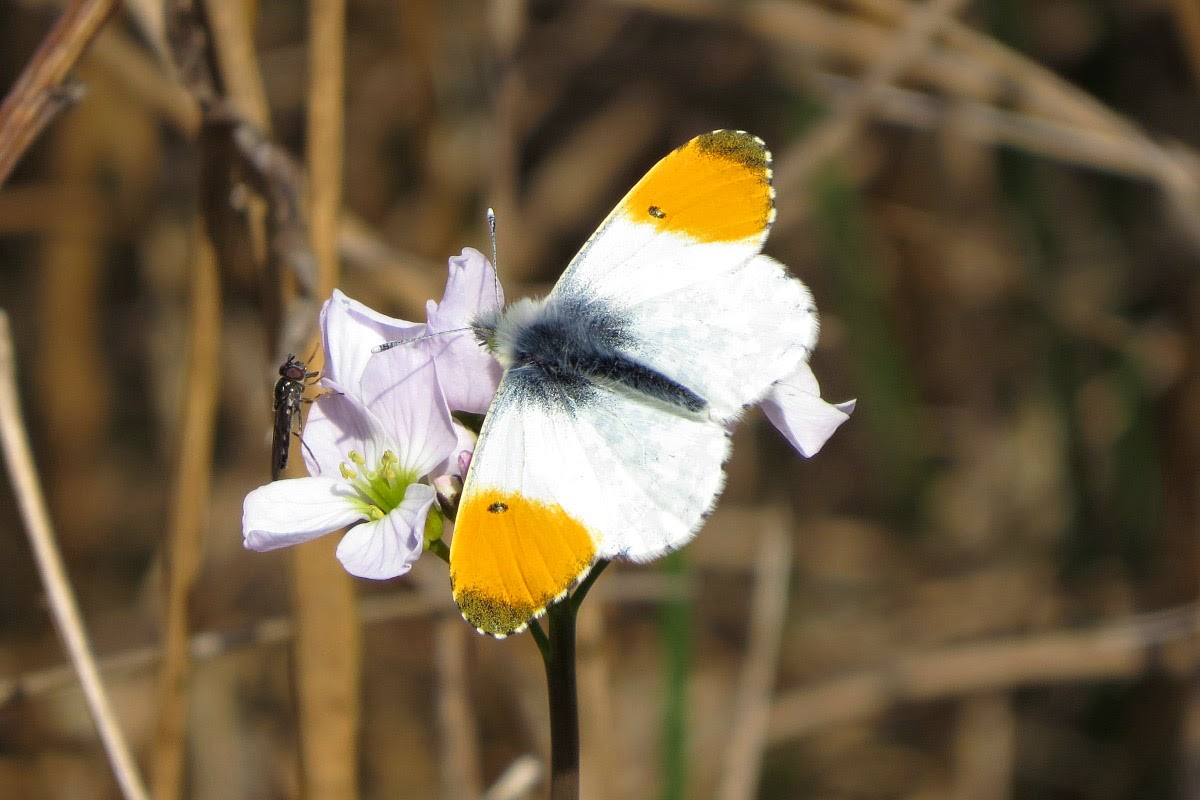 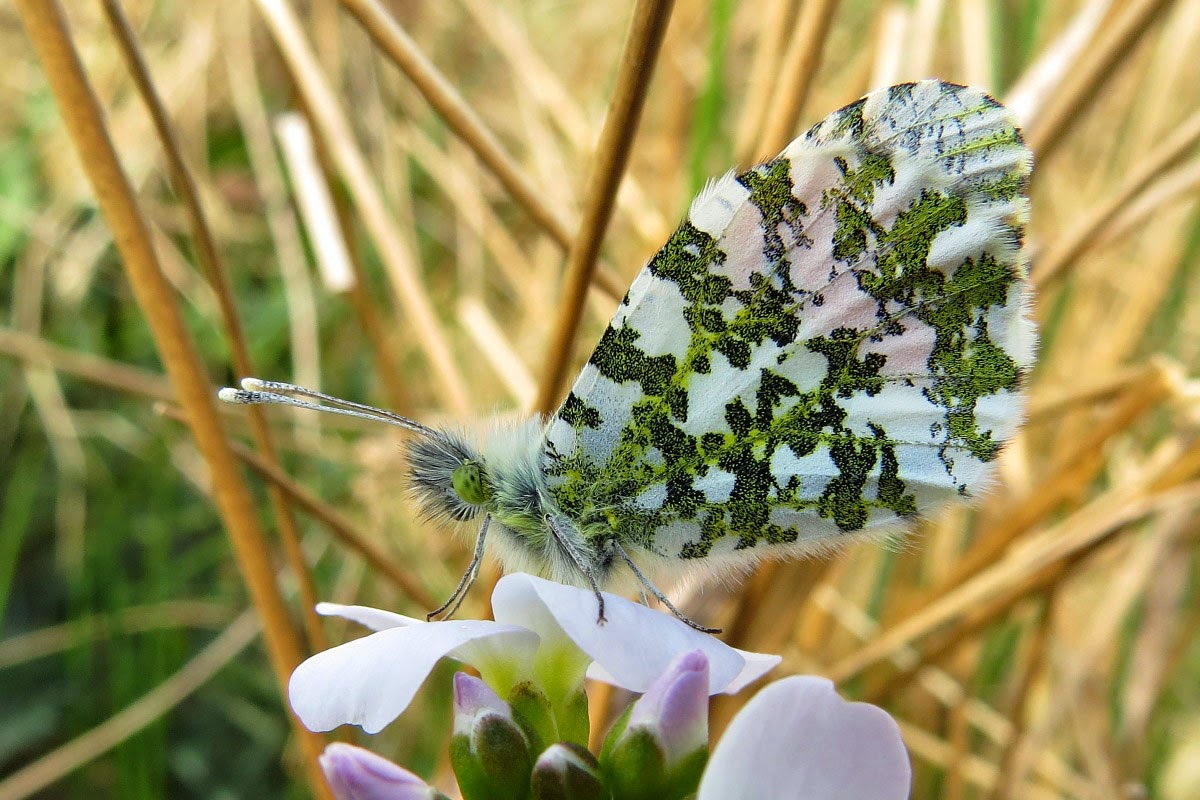 Having visited earlier in the day without much of note being seen, a dash back down to the lake this evening was necessary with the finding of a Red-rumped Swallow over the lake. Thankfully it was still present amongst the gathered hirundines when I arrived, and although keeping tabs on it was a challenge as it zipped back and forth around the lake and adjacent area, it gave good views overhead now and again, and was great to finally catch up with one on the Patch having missed a few which had passed through in previous years.
Just getting a photo in focus, let alone a decent one was a frustrating task given how mobile it was, but I did mange the odd acceptable record shot, with a collage of them below. 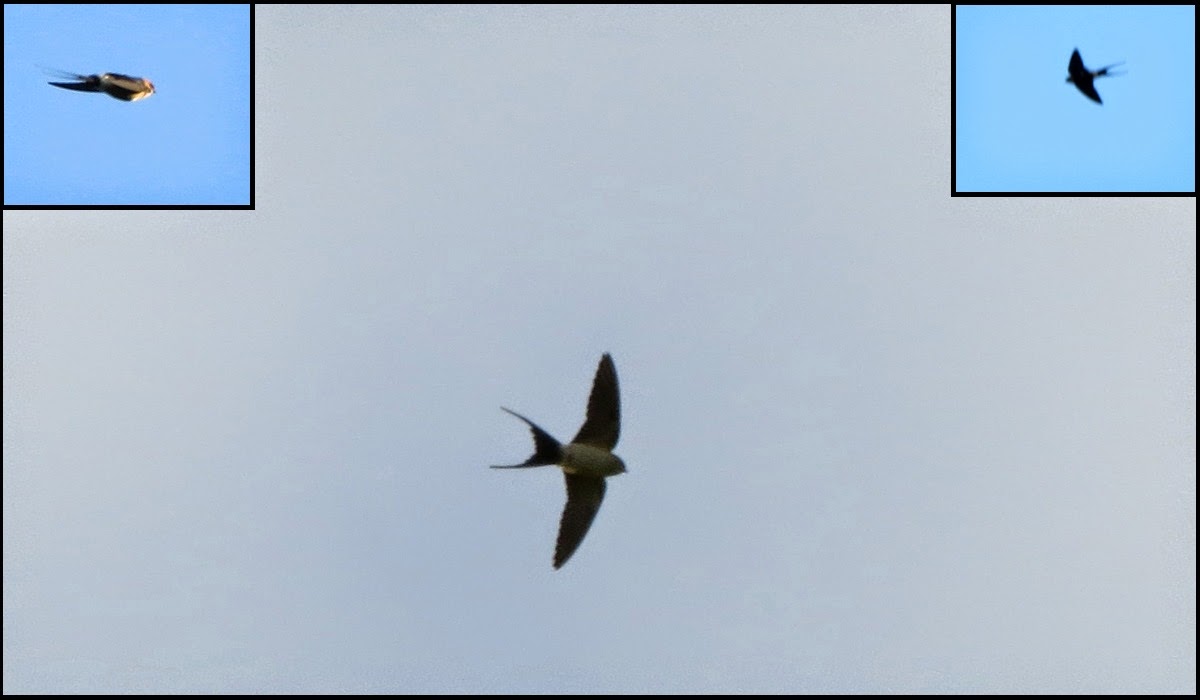 The first highlight during a walk down to the lake this evening was this male Wheatear on the wall down from the church. 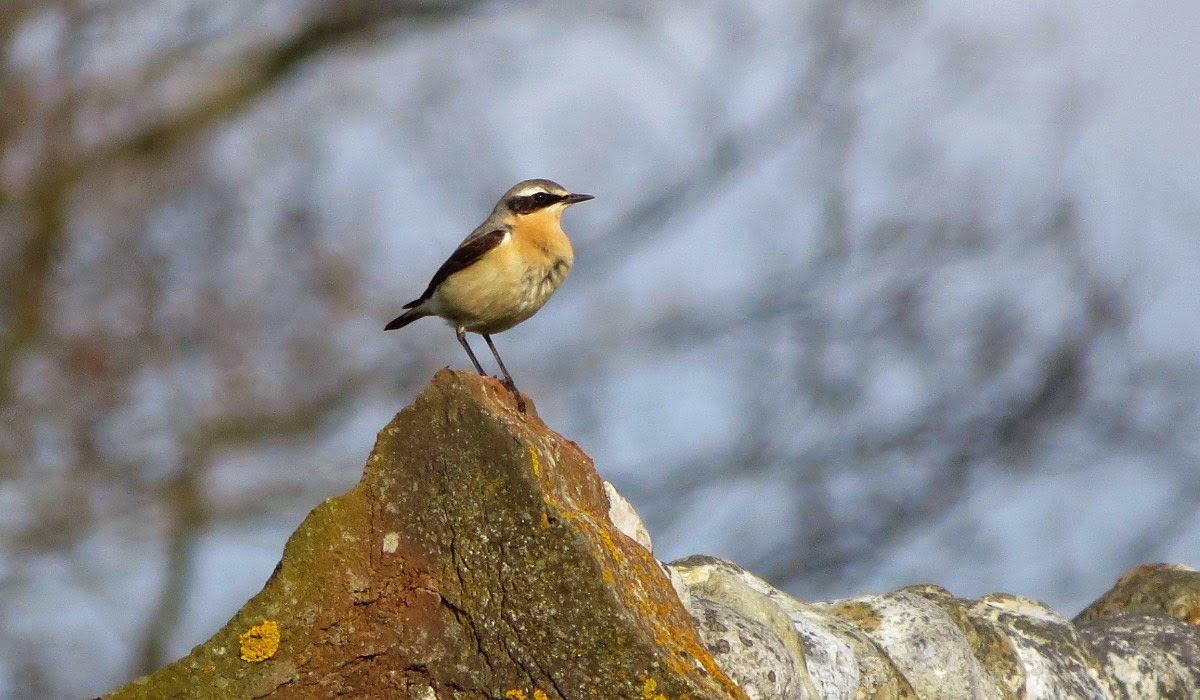 A familiar call then had me quickly looking round to see a Ring Ouzel dropping down into the adjacent meadow. 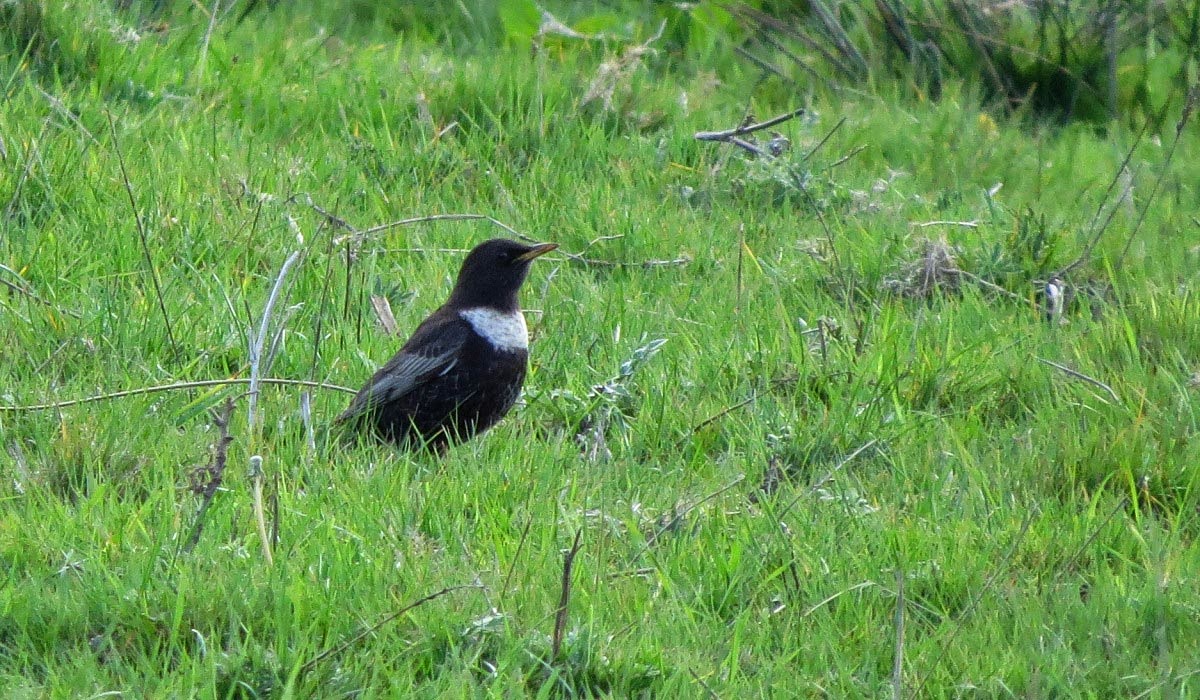 After a while it joined a second one, and along with a Mistle Thrush, they gave good views feeding out in the field.
Then another familiar sound caught my attention as the pair of Mandarins flew onto the lake calling away and then fed along the western shore. 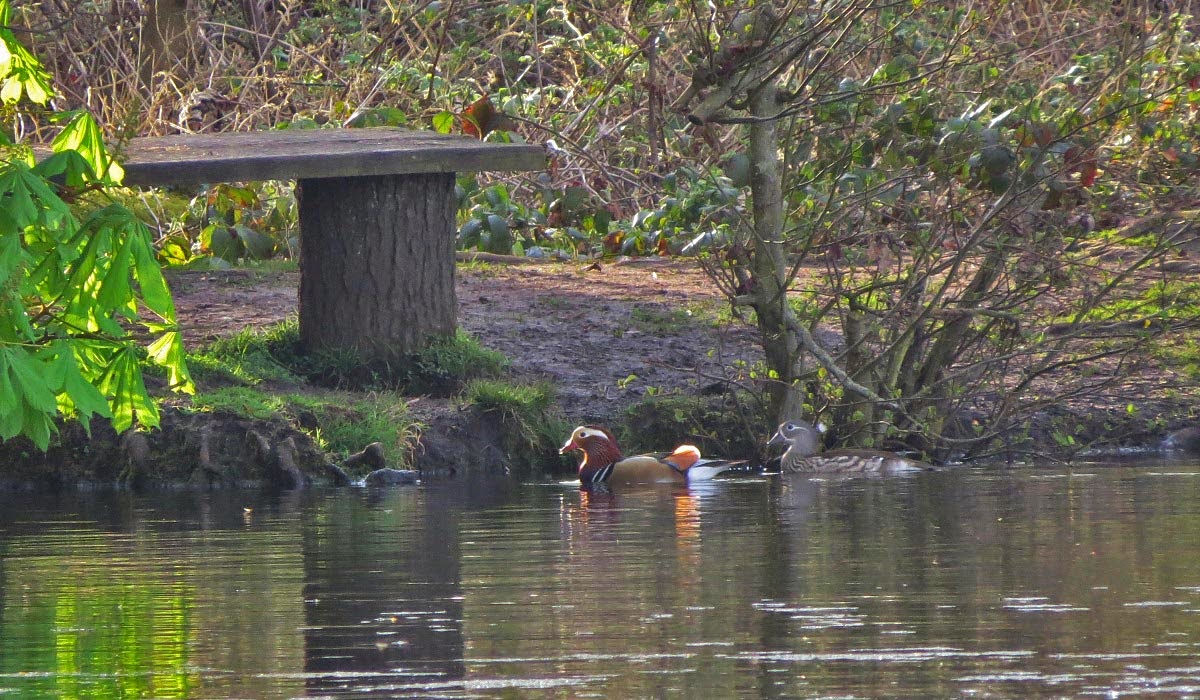 As hoped for in my last post, a second Coot had indeed appeared on the lake, although there appeared to be little interaction between them so maybe they're the same sex, but at least one of them provided a better photo opportunity then last time. 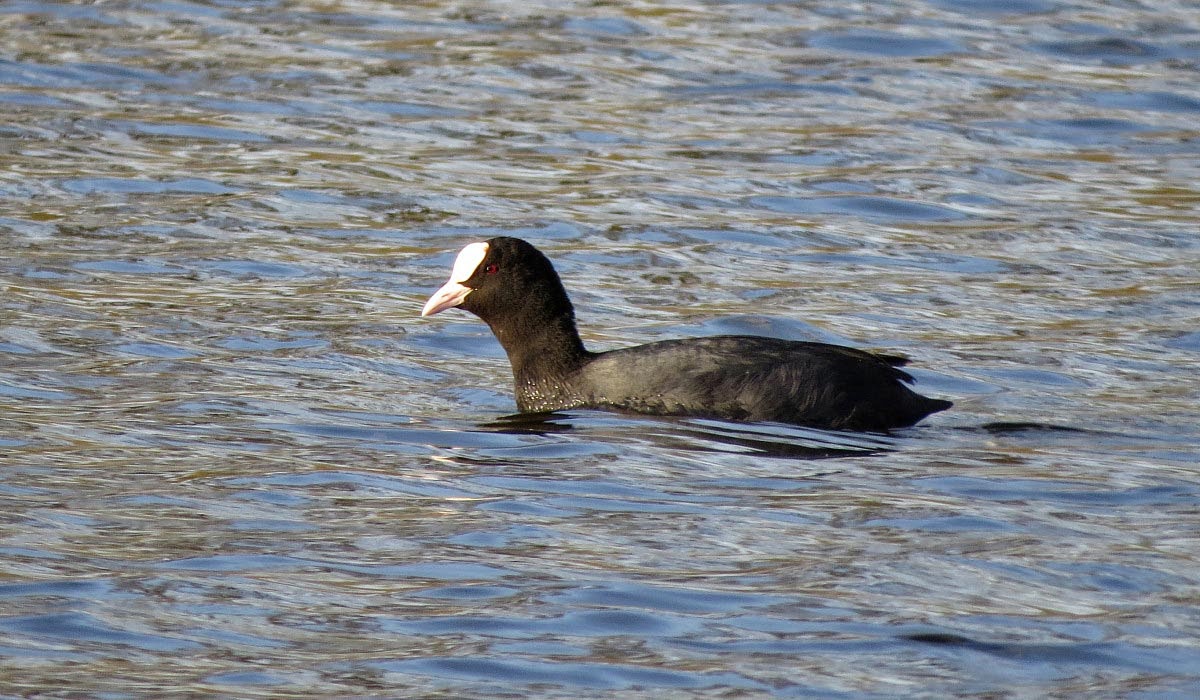 As last time a nice flock of Sand Martins congregated over the lake as the evening progressed and the first couple of Swallows for the year joined them too. The Grey Wagtail was flying back and forth round the lake, and a pair of Gadwall were also present briefly on the lake before flying off.
Posted by Simon at 8:19 pm

Over the last week a few more summer migrants have made an appearance in the park with Willow Warbler, Blackcap and Sedge Warbler all firsts for the year. Other notable records in the last few days included the appearance of a drake Gadwall and a pair of Shelducks on the now rapidly draining water meadow, along with a Green Sandpiper.
Todays highlight was the years first Coot to appear on the lake which will hopefully now summer and fingers crossed attract a mate too. 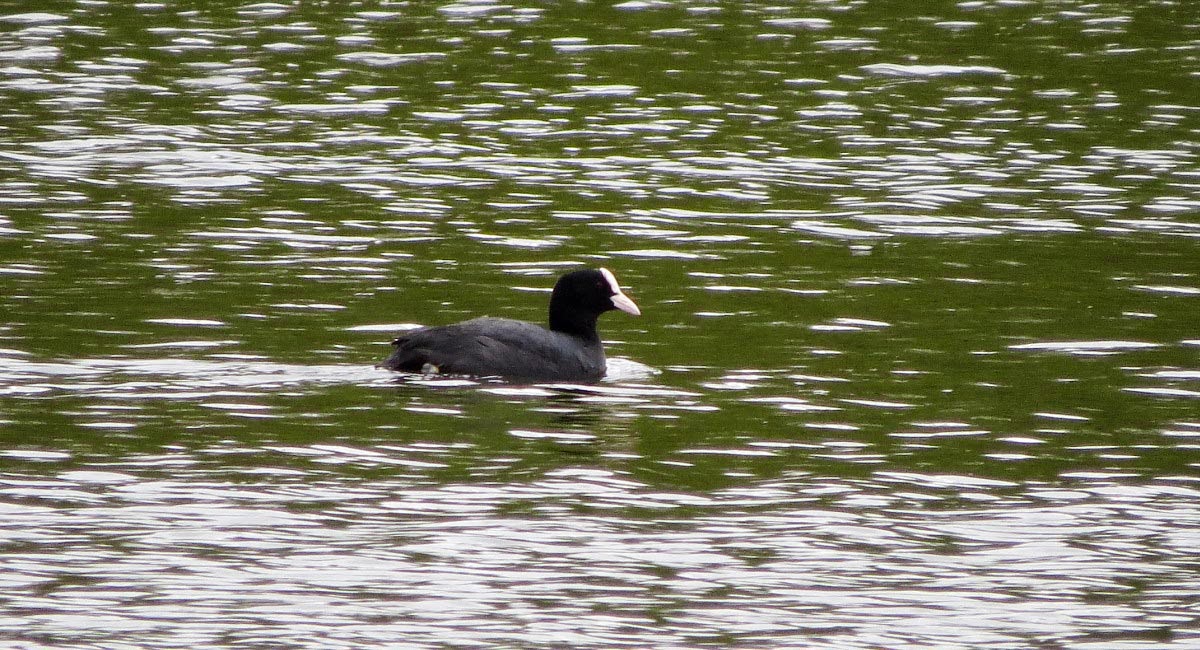 Also this afternoon a nice flock of c20 Sand Martins were feeding over the lake, and a Red Kite drifted north. 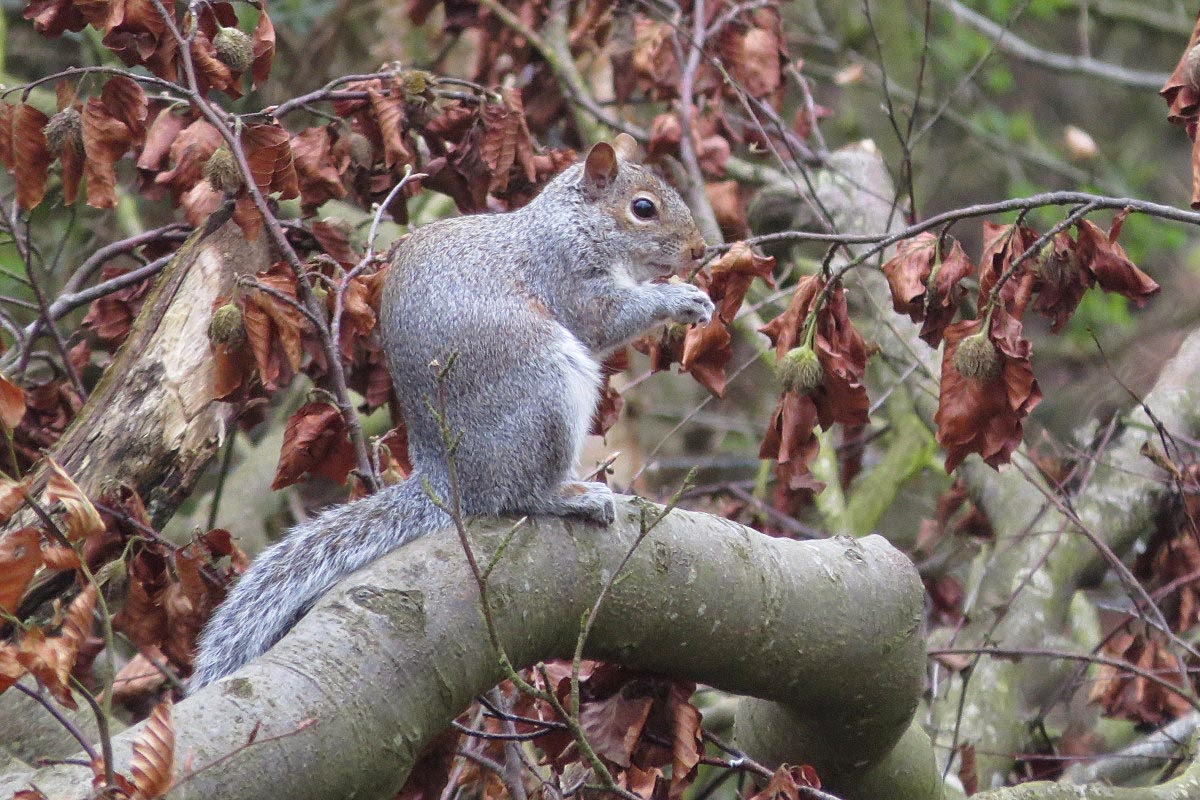 Simon
I have been interested in wildlife since my childhood with my main passion of birdwatching being formed when our family moved to the north Norfolk coast. Over the last few years I have also developed a real interest in Butterflies and Dragonflies, and through this blog I intend to develop my interest in nature further to include all aspects of flora and fauna. I also enjoy taking photos whilst out enjoying the countryside and will naturally include many of them on here.